For the last 8 years Daniel Barenboim has conducted  the West-Eastern Divan Orchestra in an open air concert in Madrid’s  Plaza Mayor, free of charge for the audience. This year Madrid was booked in as one of the venues for the European tour of this orchestra, which was founded by Barenboim and the Palestinian writer Edward Said in 1999. Then, in May it was announced that the Mayor Ana Botella was cancelling this concert and a number of high profile arts events as part of the budget cuts.

In the end there was a concert in the Plaza mayor earlier this month and the replacement orchestra was the Orquesta de la Comunidad de Madrid  (ORCAM) , conducted by José Ramón Encinar. The cancellation surfaced as a news item this week because it was raised at the  press conference  in Madrid for the tour, which kicks off in Seville and includes a series of Proms concerts. Norman Lebrecht   made a mention of the cancellation via Twitter @NLebrecht.

At the press conference Barenboim insisted there had been no discussion about the cancellation of the concert and that he had not been given the opportunity to suggest alternatives to reduce the cost to allow the concert to go ahead. He described the way the way the matter was dealt with as “Neither intelligent nor elegant”.
I think there is no need here to describe the severe problems facing the economy in Spain, but you might be interested to know more about the orchestras which are based in Madrid. In addition to the ORCAM referred to above, Madrid residents can enjoyed an annual series of concerts by the Orquesta Nacional de España and chorus  (OCNE) , the state television's Orquesta de la RTVE and chorus, whose previous principal conductor was  Adrian Leaper , and the house orchestra at the  Teatro Real  opera house, the Orquesta Sinfónica de Madrid  (OSM) . Don’t forget the Banda Sinfónica de Madrid , a symphonic wind band which performs a lovely free summer series on Sunday lunchtimes at the bandstand in the amazing Retiro park before moving indoors for their Winter concerts.
All of these ensembles are made up of full time professional musicians and all of them except the OSM are civil servants employed either by the city, the Madrid regional government, or the national government. They have contracts for life and all other benefits associated with a civil service post. The OSM players are employed through a subcontract arrangement, but even so most of their salaries are paid from public funds.

Four symphony orchestras, two choruses and a symphonic wind band are competing for an audience in a city with a  population  of 3.237.937 and where the Madrid Region  has a population of 6.387.824. Of course, when I use the word compete it is misleading: these ensembles do not really compete for an audience because they do not depend on ticket sales for their survival, they simply rely on government funding. I am not going to do the maths here but  when my grandfather used to talk of people who lived a champagne lifestyle on a beer income he might have been talking about classical music provision in Madrid.

Daniel Barenboim’s concert will have been missed, but there are very pressing needs here in Madrid and using a local orchestra instead of his touring one has not exactly brought the city to a halt. The Plaza Mayor was just as as full  to hear the ORCAM conducted by José Ramón Encinar as it would have been to hear the West-Eastern Divan Orchestra conducted by Barenboim. Among the clatter of plates and glasses with tapas and cerveza, and the waiters in the bars around the seats in the square calling out their orders, some people might not even have noticed the difference.
(This post was amended to include a correction about the RTVE on 21/7/2012)

Last week I went to see a show called Nobody is who they seem to be Nadie es quien parece ser  at the  Teatro Alfil here in Madrid. The theatre is one of the most long standing and best  known venues on the city’s very active alternative scene, and has recently removed part of the rows of seats to make way for a cabaret style table and chair arrangement, which makes it a perfect setting for this kind of show.
This is the first full length show to be produced by the Tap Show Project. 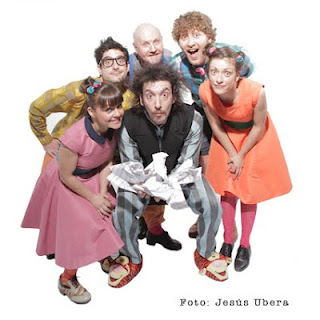 Tap Show Project’s  original feature is that it is a dance group which specializes in tap. The show, according to the company director Lucas Tadeo, is aimed at catching the imagination of children and opening their eyes to the world of tap. According to John O’Brien, the show’s choreographer, it’s a great example of the best  family entertainment, where parents take their children along and then find themselves enjoying it as much as or more than their children.
There are lots of familiar elements as the evening goes on, a mad genius type writer looking for inspiration, who turns out to be the pianist, comedy routines  and a large helping of audience participation.  John O´Brien, Lucas Tadeo, Roberto Bonacini, Angélica Arévalo Moya and Ainara Prieto are the expert and always entertaining dancers who make this show stand out from the rest. Their routines vary from ensemble pieces to solos and include competitive dueling which is part of the tap tradition.
The music is a mix of original tunes by the pianist Augustín López, and  well know Broadway melodies. I expect that as the show develops there will be less dialogue to leave room for a couple more dance numbers, and that technology might be included in the moments where it would enhance the show, such as in the body percussion number, where some simple  midi sound pads would make all the difference.
My favourite moments of the night? Definitely the dueling between Lucas Tadeo and John O’Brien,   and John O’Brien’s amazing solo number, showing off his brilliance as a tap specialist of long experience by bringing so many styles and so many changes of mood into one extended solo. 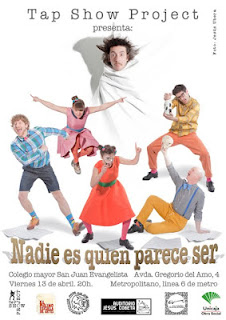 For a review of the show in Spanish it's worth taking a look at the blog called Blog de Musicales by Norman Marsá:  http://blogdemusicales.wordpress.com/2012/07/03/tap-show-project-un-espectaculo-de-claque-para-ver-en-familia/


I wrote a few lines in an earlier post about  the  Madrid Tap Fest here: http://www.interculturaldialogueandeducation.org/2011/05/madrid-tap-fest-may-2011.html


Thanks Tap Show Project for a fun evening out, and good luck with the remaining shows coming up at the Alfil.

Posted by TimothyJoneswriting at 14:02 No comments: