The Polyglots, The Beatles and a Spanish Monster

How many times have you done some work and found that the experience of meeting the people you worked with was worth much more than the fee you were paid?

This was my experience a couple of years ago in Madrid. First there was a call from a music producer asking for help to arrange for her to audition my students. Easy, just sent a message out and dozens of wannabes turned up to sing. Finally one of my pupils was selected and earned a handsome reward for her part in the recording. Then I was asked if I would call in at the studio and listen through the adult and children´s recordings to check on the English pronunciation. All good, easy and fun to do, a bit of cash and a change from routine and a chance to meet some wonderful musicians and actors.

Then I was asked to look over some lyrics for the next stage in the recordings. This meant that, after meeting so many talented and courteous people I also got to meet the big boss, and this was a real pleasure. The boss is none other than Oscar Gómez, a “Monstruo” in music recording in Spain. Sr Gómez has written songs for top entertainers over thirty years which have become part of the cultural landscape in Spain and Spanish speaking countries.

This was supposed to be “a couple of quick chats” but turned into numerous visits and each session was like a Spanish inquisition, though Sr Gómez would perish at the thought of being associated with that part of his country’s history. Whenever I suggested a word change he put me through an interrogation to justify my requested change. After all, he had chosen every word of every line with great care, his English was really good and he had been writing hit songs forever.

It´s hard to argue your case for changing a word when all you have is a feeling that it´s not quite right: it doesn’t have to be a matter of grammar, just a sense of up to date use of the language in the end. His attention to detail and his perfectionism are clearly part of his success story, and sometimes he even let me convince him I was right.

One day we were about to start and Sr Gómez wanted me to wait and asked if I had heard the recently issued Love album of The Beatles remixes. He played the opening track Because through the studio speakers and out came this amazing acapella sound of The Beatles in close harmony, which had existed for nearly 40 years but had so far been unheard in that form. He was transfixed, lost in admiration for The Beatles, for their music and for the production quality that made this miracle a reality. These are among the characteristics of truly great professionals, aren’t they? It’s their ability to recognize the achievements of other practitioners in their field, and their capacity to be impressed by something new even when you would think they have seen and heard it all.

All this brought about the cd and video featuring some loveable characters, lovingly created and expertly realized by a team of slightly mad but extremely professional actors and musicians: they are…..
The Polyglots ......
Big-O a big-hearted flirty rapper, Patata a fun mischief maker, Karim shy, timid and absent minded, Violeta a bad tempered dancer, Tati miss perfect, a true romantic and poetess and Correcto a likeable true blue Brit teacher. 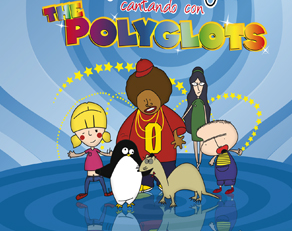 Two boys and two girls, together with a ferret and a penguin, make up The Polyglot team, singing their cool songs designed to make learning English that bit more fun.
It was a great pleasure to see this project come to life. Most of all I enjoyed meeting these amazingly creative people, especially Oscar Gómez, a Spanish monster in the best sense of the word.