The High School Affiliated to Renmin University of China arranged a conference in Beijing as part of the school’s 60th Anniversary celebrations under the title: Education, Innovation, Talents: Common Focus in a Multinational Context.  The international forum, held  at the Beijing Friendship Palace conference centre in August 2010, was attended by 200 teachers from the school, 250 principals from Beijing, Shanghai and numerous provincial towns and cities, and 50 speakers from Asian and Western schools and universities. I was honoured to be invited to speak at the conference on the theme: Promoting Intercultural Dialogue through Performing Arts.
The High School Affiliated to Renmin University of China is recognized as one of the leading schools in Asia. There are 4,000 students who are citizens of the People’s Republic of China, and approximately 200 short term international students. The school’s renowned Principal, Madame Liu Pengzhi, was recently inducted into the Chinese State Council: she is one of Asia’s leading experts in education and has been responsible in large part for the design and implementation of curriculum reform in China during the last ten years. 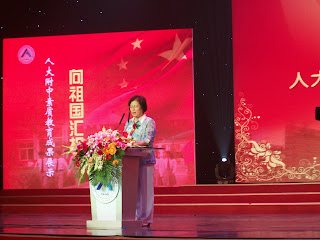 I would like to offer my congratulations to Madame Liu both for what has been achieved at this school during her time as Principal, and for this excellent conference. In every way it was yet another example of the levels of excellence we have all come to expect of the High School Affiliated to Renmin University of China.
The opening ceremony was held at the Renmin University, with technical support and star presenters  provided by the China state television company. Senior members of the Chinese Ministry of Education and dignitaries of the city of Beijing were among the guests.
After a series of speeches there were outstanding performances in music, football, dance and martial arts. 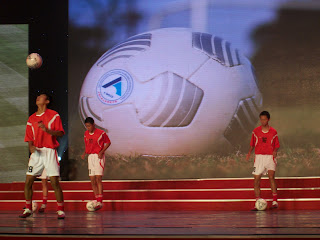 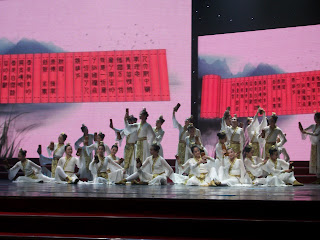 There were moving speeches by teachers and workers from all areas of school life and from parents. Among the most inspiring speakers were a group of China’s team of astronauts. Senior students spoke fluently in various languages, including English, French, Spanish, German and Russian, and school leavers on the point of taking up places at Harvard and other leading Western universities spoke of their gratitude to their teachers and parents.
The High School Affiliated to Renmin University of China encourages its students to play a full part in social action projects, so it was fitting that the event finished with a presentation of students with limited means from outlying provinces who have been financially supported to study at High School Affiliated to Renmin University of China, and they were joined by their families in a moving celebration of achievement made possible by the school’s generosity. www.rdfz.cn 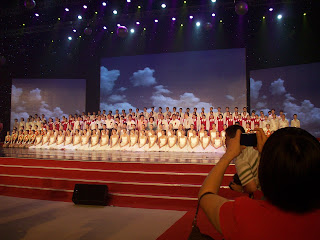 The Forum proper, under the title Education, Innovation, Talents: Common Focus in a Multinational Context, began the day after the opening ceremony.  After a welcome, Vice Principal Zhai Xiaoning introduced the dignitaries, who included senior members of the Chinese Ministry of Education and other government figures, and leading figures of the city of Beijing.
In her keynote address, Madame Liu spoke of the need to provide an education directed to the needs of individual students and to developing creativity and innovation. Madame Liu’s philosophy is that a one-size-fits-all education is not sufficient to meet the needs of today’s society. She insisted that as well as an academic curriculum of the highest standards, a school should develop the whole person and be attentive to special needs of individual students. Among her examples was a student who excelled in miniature sculptures: this young man was given special tuition by artists and encouraged to develop his skills, so much so that he later exhibited and was awarded national prizes recognizing his achievements.
Madame Liu  summed up by insisting that a good education is one which is good for the student, which helps the students make a contribution to society and which thereby makes a contribution to mankind. Love is at the heart of education: the natural flow of feelings enables students to respect those around them and leads to more creativity. This is at the heart of the medium to long term plan for education to which she has made a significant  contribution, and which the Chinese government has recently published. She closed by saying, “Our future depends on nurturing innovation and creativity”.
Dr Anthony Seldon, Master of Wellington College, spoke on The New Role of Positive Psychology in Raising Pupil & School Achievement. He drew on the work of Martin Seeligman and the Harvard professor Tal Ben-Shahar, whose lectures on Happiness recently caused a furor and became the classes with the highest attendance record on the campus. He summarized by saying that education tends to focus narrowly on the logical and linguistic areas of intelligence, whereas we should be broadening our focus to include the other areas of intelligence identified by Howard  Gardener, among others.  http://www.wellingtoncollege.org.uk/
Dr. Seldon referred to the need for us to teach our students to be positive about life and society, to teach them to avoid the cynicism which is becoming so prevalent in the young, to understand the workings of local and regional governments, among others, so that they appreciate the positive achievements of these institutions. Through this understanding of the world around them, we give our students, in Dr Seldon’s  words, “Reasons to be grateful”.
Professor Fernando Reimers, the Ford Foundation Professor of International Education and Director of International Education at Harvard University, spoke on the Role of Education in Developing Global Competency.
Here is a brief summary of his presentation, in which he explained his view of Global Competencies which are necessary for all students:
A positive disposition towards cultural differences;
An ability to speak and to understand various languages;
A deep knowledge of world history and geography and the ability to think creatively based on this knowledge, together with a knowledge and understanding of global institutions.
Professor Reimers warned against the attitude which attempts to provide students with Global Competency by simply arranging a one-off international day per year: global issues need to be an integral part of students’ academic and social experience throughout their years in school. http://www.gse.harvard.edu/faculty_research/profiles/profile.shtml?vperson_id=252
Posted by TimothyJoneswriting at 16:48