CaixaForum, Madrid: a model for museums the world over

There’s that really bad joke where the teacher says: Mr Smith, your son is a model student … unfortunately not a working model.
In the case of the CaixaForum, nothing could be further from reality, it is working in every sense of the word, in the quantity and diversity of activities it provides and in the effectiveness of these activities in attracting a wide range of audiences. The CaixaForum is operated by the Barcelona based savings bank La Caixa. 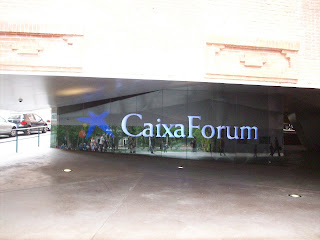 This weekend I called in there again and walked past a room with a children’s activity  and into an exhibition of black and white photos. New technologies were used to involve the little kids in a creative activity that placed themselves very much in the picture of sustainable use of the environment on a video screen, and the photographs were  by  French artist Jacques Henri Latigue (1891 – 1986). On another floor there is a viewing room for film and video, with comfortable sofas and  even mattresses for those who wish to stretch out full length. On top of all that there’s a mid-price restaurant operated by the Arturo company, I mean literally on top: it’s on the 4th floor and offers views over the city centre rooftops on one side and the tree-lined Paseo del Prado on the other, as this wonderful institution is just across the road from the Botanical Gardens and the amazing Prado art gallery.
Even before getting inside the CaixaForum, creativity and a commitment to respecting the environment are evident in the 4 storey high vertical garden, literally a profusion of plant life which fills the entire wall. 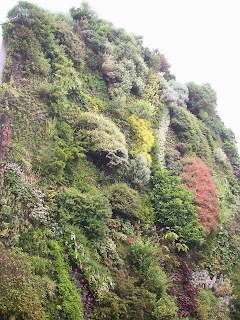 I have written admiringly about the social actions of La Caixa in a previous post “Social Inclusion in Music Education”, and the same level of commitment is a constant in the choice of exhibits at the Caixa Forum.   Currently there a series of short documentary films from around the world, featuring persons at risk of social exclusion. I saw a film telling the tragic story of a peasant community in El Encanto, in Colombia who have returned to the countryside to reclaim land which was once theirs, and from which they were evicted by armed groups of uncertain origin. I noted the words of one particular man, courageous even in his grief: “I was born in poverty, and I have lived in poverty… I am comforted by some of my children, others I have lost along the years,  killed by gunfire for reasons they did not understand…” 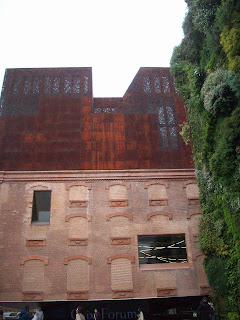 Thank you, CaixaForum, for making my Saturday afternoon so worthwhile, with something for body, mind and soul. http://obrasocial.lacaixa.es/nuestroscentros/caixaforummadrid/caixaforummadrid_es.html
Posted by TimothyJoneswriting at 23:03