I went to a great show the other day: it was the launch event for the Madrid Tap Fest, held at the beautifully decorated Café in the basement of the Teatro Arenal in central Madrid.  I’ve been to this theatre several times before, as they have a regular flamenco show at 6pm for a very reasonable price, aimed at giving a genuine mini version of live music and dance to tourists: I’ve taken groups from China and from France to these shows and they’ve been a great success. The Café area itself is really welcoming, take a look at their photos: http://cafeteatroarenal.es/ 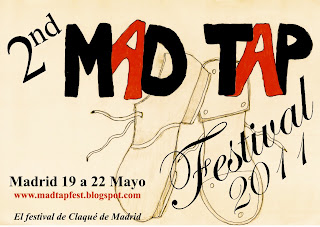 Anyway, back to the Madrid Tap Fest.
The Tap Fest is the brainchild of hyperactive TJ Jazz, ok a crazy name for an artist, but you can see who she is at her Fb page:  http://www.facebook.com/profile.php?id=1002674756
The show featured items by a number of dancers including TJ Jazz herself, of course, plus Rafastaire, Mónica Puebla, Lucas Tadeo, a group called Ginger Ale, a group from the Blanco y Negro Estudio Dance school, Gonzalo Larrazabal, and a guest tap artist from Greece, called  Thanos Daskalopoulos, who left the national debt at home, thank you very much, as it’s causing us enough problems here in Spain already. Before the finale, a free for all involving the night’s leading dancers, there was an amazing swing tap duo by my friend John O’Brien and Fernanda Pardo: a virtuoso example of speed, inventiveness and acrobatic expertise.
Here are a couple of photos from the programme the Madrid TapFest group took part in on Spain’s national radio RNE: I’m featuring the photo of John O’Brien starring in a tap solo on the radio, I think it’s really unique. As you can see, he’s listening to the playback of the music through the headphones, and has a board to amplify the sound of the tap shoes.  A little bird tells me they had lots of funny looks from security as they walked in with the wooden  board. 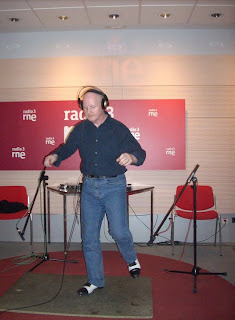 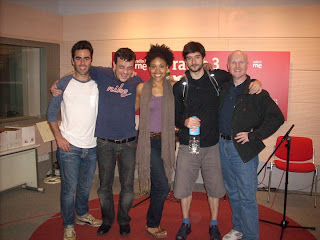 I really enjoyed the live music accompaniment to various of the dance numbers and to TJ Jazz’s singing, provided by the trio: Javier López, Héctor Oliveira and Roberto Natal, very nicely played, thank you.
So, yes I enjoyed the evening and thank you to the Madrid Tap fest committee: TJ Jazz, Mónica Puebla, Jessica Flores and Ruth Pereiro. This is a great initiative which has obviously caught the attention of the dance community as the theatre was full to bursting, and there is much more to come over the weekend.
Read all about it...  http://madtapfest.blogspot.com/
Posted by TimothyJoneswriting at 13:08