Guadalupe Álvarez in a Tribute to Joni Mitchell in Madrid July 2015: review 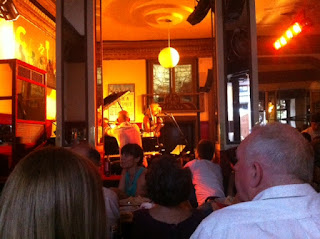 It was my friend Michael who first alerted me to Joni Mitchell’s   health  problems earlier this year. It is clear from his Facebook page that he has been a devoted fan for many years, I mean of Joni Mitchell, not of me. I confess I have not followed her with the same devotion: for me Joni Mitchell from a distance has been a combination of a thinking person’s Madonna and a Bob Dylan alter ego with a better voice.  I suppose Both Sides Now is the song that I would think of as essentially hers, Joni Mitchell’s, I mean, not Madonna’s. Yes, in part due to the scene in Love Actually, sorry.

So, when I got back to Madrid for the summer I noticed a Tribute to Joni Mitchell concert in the listings. Normally I would run a mile rather than go to a Tribute To … concert as I can live without a bunch of wannabees cynically living of other artistes’ achievements. Still, with Michael’s heartfelt messages in mind, and with the confidence I have in the Café Central,   in Madrid  along I went.

Guadalupe Álvarez is a fantastic   singer  and this concert was wonderful. I had never heard of her before (sorry!) but she is a renowned singer in her native Argentina and has many achievements and recordings to her name: here´s just    one example. She can take a song from a whisper to a 10 force gale in the space of a line, her jazz phrasing is rhythmically excellent, and her pitch control in the many angular phrases of these interesting songs was superb.

On top of all that is her expressive power. There is a myth in show business that you can only be really expressive as a performer if you have suffered in real life, as if the real life suffering were the true inspiration for great performances. I saw this earlier this month in an article by Dan Cairns, who should know better, writing about Cilla Black in the Sunday   Times  (paywall).

I don’t know whether Guadalupe Álvarez has suffered in her life or not: I hope not.  She certainly is able to perform these powerful songs in a way that brought tears to her eyes, and to mine. I think there are other things you need to be able to express deep emotions in music: among them are a well developed technique on your instrument/voice; a careful choice of material/repertoire with arrangements that present the material at its best; and an accompanist or band who present your work in the best light.

On this occasion at the Café Central Guadalupe Álvarez showed that she has all this and more.  Her own technique and performance standards are superb, and she has surrounded herself with excellent musicians who, as far as I can see, have all contributed to the interested and varied jazz arrangements of Joni Mitchell’s songs:

There was a lot of noise, in the best sense of the word, of high energy power music in this concert. One of the most interesting points was a solo by Toni Brunet, accompanying himself on guitar. This was among the quietest few minutes I have heard at the Café Central in more than 20 years of going to concerts there: a wonderful performance.

All the songs were arranged in a very interesting and sensitive way. These were not just copies, they were genuine arrangements with a strong jazz flavor. I would like to hear this same group of musicians play a straight jazz set: something to look forward to.  And in the end, there it was, Both Sides Now, sung with passion, pain and power from the very depths of her being to the most needing points of my heart. Wonderful.

So, thank you, Michael for many things: most recently for jogging my mind so that I saw this concert.
And thanks to Guadalupe Álvarez and musicians, and Café Central, for an excellent evening of music.