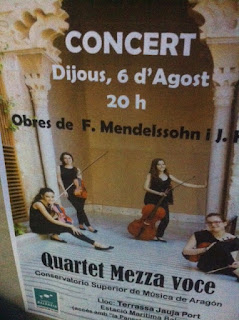 One of the nice surprises in  Denia  this year was to hear a concert of string quartet music in a relaxed atmosphere with views overlooking the historic castle. Young talent and ancient views combined in a very enjoyable occasion on 6 August at the  Jauja Port   venue.

Sadly I missed the first part of the concert because this area was new to me even though I have been holidaying in Denia in Spain for more than 20 years. It was certainly worth the effort required to find the concert.

The Quartet Mezza Voce performed Mendelssohn’s Quartet Op 13 no 2 in A minor. Of course the playing was excellent, after all these young players are students at the Conservatorio Superior de Música de Aragón. (I missed the Haydn Op 76 no 3 in the first half of the concert.)

Yes but … the moving thing for me was to see a string quartet whose players have rehearsed painstakingly throughout the year and who have been able to arrange a tour which takes them so far musically and geographically. Denia is more than 400 km from   the conservatoire in    Zaragoza, where they are based. Much more important is the musical journey they have undertaken together. It was clear from the standard of playing and from the quality of their ensemble technique that they have performed this repertoire in several concerts. 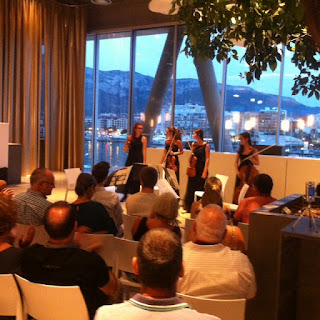 The history of music is full of quartets which have started with great promise and yet have faded away. The point is that there are so many difficulties involved in maintaining a quartet: from the logistics of having a rehearsal venue to rehearse together for several hours a day in addition to the hours of individual  practice the players need to keep up their technique; the financial demands; adjusting to each member’s taste in choice of repertoire, and finding venues to play which will keep the quartet alive.

Many of these problems are explored in the fictional story of a string quartet based in New York City: an entertaining film,  A Late Quartet   starring Philip Seymour Hoffman, among others.
Thankfully, the young players of the Quartet Mezza Voce are young enough not to face the pressures of those fictional musicians, and, more importantly, have had the benefit of coaching  from the members of one of the leading string quartets active today, the Cuarteto  Quiroga .

The debate about getting music out of the strict formalities of the concert hall is alive and well: some musicians are exploring alternative venues including car parks. There are advantages in using venues which are not formal concert halls, even though we have to put up with little children running around and the clink of wine glasses being collected by the bar staff while the musicians are playing. On this occasion, the disadvantages were outweighed by the pleasure of listening to this lovely music.

A concert in this venue would have been impossible just a handful of years ago. The Balearia shipping company have made substantial improvements to the port facilities to provide docking for larger vessels, including an entirely new dock area for their ferries, and there are many improvements in hand which are making Denia a more attractive place every year.

Thanks to the Balearia company for making this concert possible, and thanks to the wonderful young players of the Quartet Mezza Voce for their lovely playing. I hope to hear you all playing together in 20 years time.
Posted by TimothyJoneswriting at 19:17