I have just received information about the 2011 the Tambo International Art Camp and Festival Tambo to be held in Pembo, Mozambique:
11th to July 18thJuly 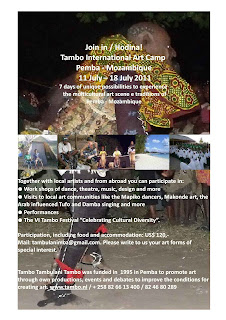 The 2011 edition will be the sixth summer camp organized at Pembo. Here is a description from the organizers of last year’s camp:
Approximately 130 artists were during the week involved in workshops, visits and
performances.  1.900 people visited the art camp and festival giving them and the artists
opportunities not only to see expressions already known to them but also new experiences in
how art can be presented and done. Cultural and artistic exchange, friendships and knowledge were gained between artists and audience.
The local Nanhimbe Youth Choir with its teacher Ntessa presenting his songs composed to
bring joy and development to all generations showed once again the rich base of art talents
Pemba has.


The range and diversity of artists taking part is impressive. Here is just a brief selection from 2010’s report:
Poetry:
Mbizo, poet from Zimbabwe and  the young poet  'King' from Maputo.
Music:
Professor Orlando da Conceição renowned saxophonist from the Mozambican capital;
Mapiko de Mueda - 25 performers  drumming and singing, from the far north of Mozambique;
Miss Mamy from Nampula, an  18 year old singer;
Companhia Distrital de Canto e Danca de Chiúre (The Song and
Dance Ensemble of Chiure District).
Theatre:
Chirindza Carlos with his monologue, from Maputo.
According to the organizers:
Mutumbela Gogo live, one of the leading and most famous theatre ensembles in Mozambique, brought the play ‘The Daughters of Nora' by the Swedish writer Henning Mankell. It was performed by Lucrécia Paco, Graca Silva and Yolanda Fumo who also guided the theatre work shop at the art camp.
Os Novos Horizontes (The New Horizons) from the town of Pemba brought a surprise even for the residents coming from Pemba; a theatre play focusing on domestic violence…
PRONANAC, from  Mecúfi  (Province of Cabo Delgado) presented a theatre play about issues that their rural population are dealing with daily.
I have not been to the camp before and I have no personal knowledge of the organisation, so this is not a recommendation, but the list of sponsors includes, according the the organisers’ information:
The Danish Embassy, Helvetas Mozambique, The Finish Embassy, SolidarMed, Cultural House of Pemba, Merkurfonden, Barbara Kruspan from Project CAP( Art project of Merry Trust) and Markus Nußbaumer (Horizont 3000).
The cost of attending this camp is really low, so it makes a very interesting option for a culturally enriching summer camp experience. Here are the contact details for the 2011 camp:
www.tambo.nl
tambotambulanitambo@yahoo.com
tambulanimoz@gmail.com