Students from Beijing meet their contemporaries in Madrid

It has been my great pleasure to welcome to Spain eleven students from the High School Affiliated to Renmin University of China, from Beijing, accompanied by their teacher, Du Fang, in a visit organised through my school.
This is the fourth year that a group from the High School Affiliated to Renmin University of China has visited Madrid, and this year’s students have been an excellent example of Chinese youth: cultured, well informed and knowledgeable about their own history, and about the history of Spain.  It was clear that Mrs. Du Fang has given the students the benefit of her own deep specialist knowledge of Spanish history, and the group arrived with a lively curiosity to learn more and to make the most of every moment of their stay.
We often think of intercultural dialogue as being the exclusive terrain of the great and the good, of high flying national leaders representing millions and making memorable speeches. In fact, I am convinced that modest actions such as visits by students from one country to another are a powerful force for good in intercultural dialogue: these young people represent decision makers and opinion formers of the future and their experience of Spain will leave an indelible mark, influencing their judgements about this country and about Europe as they take their place as adults in their own country’s society.
We used visits to the art galleries to place their knowledge in context. At the Museo Nacional Centro de Arte Reina Sofía we centred on the masterpieces of Joan Miró (1893 – 1983), Salvador Dalí (1904 – 1989) and Pablo Picasso (1881 - 1973). The Guernica painting is a striking example of an artist expressing contemporary thought through his art work: it is a piece related to a very precise moment in history in a single town, yet it has become recognised as expressing the pain and suffering of war which are universal. 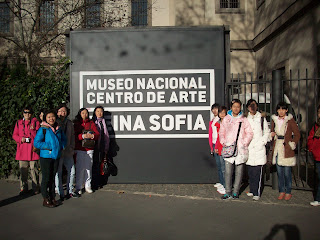 Students from Beijing at the    Museo Nacional Centro de Arte Reina Sofía in Madrid
During the visit to the Museo del Prado art gallery we concentrated on the great masters Velázquez and Goya.  The students from Beijing greatly admired the works of Diego Rodríguez de Silva Velázquez (1599 - 1660), and were captivated by his skill in the ultra complexity of Las Meninas, showing the family of his King, Felipe IV.  When it came to the paintings of Francisco de Goya y Lucientes (1746 –1828), the visitors found his work powerful, and on several occasions, disturbing. We made specific references to his portraits of King Carlos III and his representations of battles between the French invaders and local Spanish defenders, references to which we would see repeatedly as the week went by. 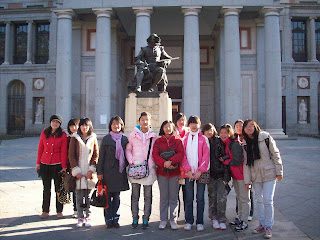 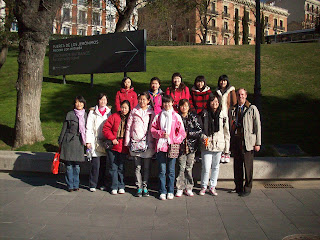 Students from Beijing at the  Museo del Prado in Madrid
Our visit to Segovia represented a step back in time: the students have their own reference point in great historic monuments in the shape of the Great Wall of China. Nevertheless, they found the aqueduct impressive in its scale and in the difficulty of its construction. Here is a perfect example of Roman engineering genius. As we moved on to another monument to historical greatness, a former convent Santa Cruz la Real, the students were able to admire  15th century architecture and to enjoy a tour of a contemporary university which is housed in a building where it is said the Queen Isabel la Católica signed her decree which permitted Christopher Columbus to sail for the New World more than 500 years ago. I will write more extensively about this visit in a following post, which will describe how we were guests of the IE University of Segovia. 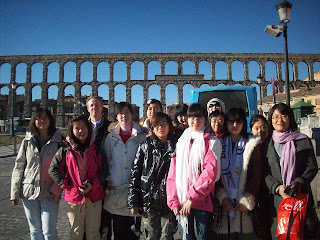 Students from Beijing at the Roman aqueduct in Segovia
Madrid’s Royal Palace is evidence of the grandeur and power of Spain in the 18th century. A tour of the building, where one salon after another dazzles the visitor with opulence, gold leaf and glitter, is a perfect visual aid to understand the place of the country as a seat of power, whose influence in Europe and in the world as peace-maker is very much alive. It was in one of the splendid salons that Spain's accession to the European Union in 1986 was formalised, and in 1991 the Madrid Middle East Peace Conference was held, at President Clinton’s initiative. 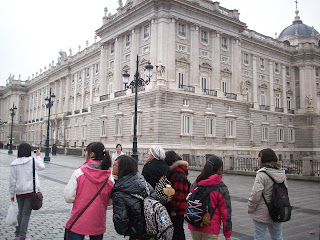 Students from Beijing at the Royal Palace
Our tour through the historical centre of Madrid included the Parliament building, home to Spain’s democratic government since the signing of the Constitution in 1978. 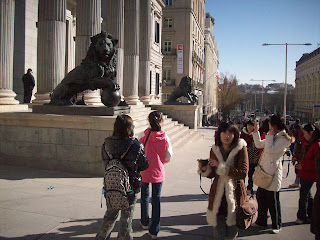 Students from Beijing at the Palacio del Congreso de Los Diputados
How would a visit to Spain’s capital be complete without a visit to that shrine of sports, the Estadio Santiago Bernabeu, home of the Real Madrid Football Club? The Chinese students enjoyed their tour of the stadium and were impressed by the huge number of trophies the team has won, and how these achievements are testimony to the club’s long and admirable history. 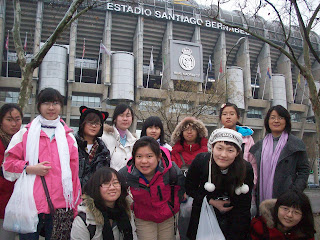 Students from Beijing at the home of Real Madrid Football Club
As our guests move on to Lisbon and Barcelona I am left with a sense of deep satisfaction that local Madrid teenagers have hosted young citizens of the People’s Republic of China in their homes and come to see them as very much like themselves: young persons striving for peace and prosperity through a world class education; and that guests from far away have come to a better understanding of contemporary Spain, a modern, multicultural country rooted in its long and rich history. 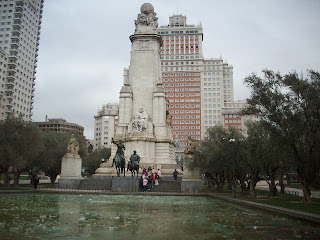